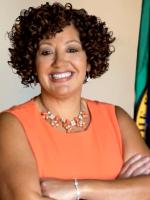 In August 2020, Regina Malveaux was appointed to Governor Jay Inslee’s cabinet as Executive Director of the Washington State Women’s Commission.

Prior to being appointed as Executive Director, Regina served as one of the Women’s Commission’s nine inaugural Commissioners appointed in 2018.
Regina has over 25 years of experience as a tenacious advocate for women and children as a non-profit executive, victim’s services provider, community leader and policy advocate.

Previously, Regina served as CEO of YWCA Spokane, Executive Director of YWCA South Hampton Roads, Legal Advocate at YWCA San Diego and founder of the Women’s Legal Center. Through her work with the Children’s Defense Fund and YWCA, Malveaux established a national reputation as an aggressive advocate on issues related to gender-based violence and funding supports for families experiencing poverty.

Regina holds an undergraduate degree in Social Policy from San Diego State University, a law degree from Howard University School of Law and a certificate in Non-profit Management from the Harvard University School of Business. During law school, she worked in both the White House and in Congress, for First Lady Hillary Clinton and the Honorable Maxine Waters respectively.Throughout her career she has worked to train a new generation of advocates as an adjunct professor in Political, Women’s and African American studies at San Diego State University, the Institute for the Study of Race and Ethnicity at Old Dominion University, and Whitworth University, respectively.

Regina has served on a number of boards aimed at advancing racial justice, economic empowerment and victim safety including the San Diego NAACP, Washington State Coalition Against Domestic Violence, the Alliance for Gun Responsibility and the YWCA USA. Regina is the mother of two adult children, four precocious grandchildren and currently resides in Olympia, Washington. 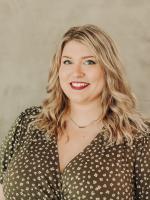 Previously, she served as Development Coordinator for YWCA Spokane, building and maintaining relationships with community partners to fund the agency's vital programs and services for women and families in support of their mission to Eliminate Racism and Empower Women. Before that, she worked for World Vision's East Africa Regional Office researching the effects of conflict on the well-being of children.

Kate is passionate about addressing the intersectional challenges faced by women in Washington and committed to seeing that the voices of her fellow Washingtonian women are heard and represented. She holds a B.A. in Peace Studies from Whitworth University. 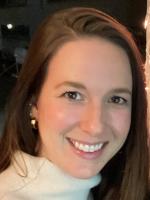 Leah White joined the Washington State Women’s Commission as the Program Coordinator in April of 2022.

Before moving to Washington State, Leah was a Legislative Policy advocate and then State Affairs Intern with the Alzheimer's Association - Tennessee Chapter. Her time was spend advocating for Alzheimer's-centered policies and educating Legislators and the public on how the disease as well as caregiving responsibilities disproportionately impact women, especially women of color.

Since completing her degree, she served as the Legislative Policy Fellow for the Women’s Commission where she worked to inform the legislature on domestic violence protection orders by compiling the voices and stories of women, domestic violence survivors, advocates, and legal aid attorneys. She left the Commission briefly to work for the Washington State Senate as a Committee Assistant for the Labor, Commerce, and Tribal Affairs committee during the 2022 Legislative Session.

She is thrilled to be back at the Women’s Commission as the Program Coordinator, where she can pursue her passion for addressing the challenges facing women and girls, working to ensure an equitable future for all. She holds a B.S. in Political Science with a focus in Legal Studies from Southern New Hampshire University.