On Monday, September 13, 2021, the Washington State Women’s Commission was proud to co-host members of the Kenyan parliament with Dr. John Yoder and Dr. Roberta Wilburn of Whitworth University, as part of the Spokane portion of their national tour promoting unity and the elimination of all forms of ethnic and gender discrimination.

From the Kenyan delegation, the Commission had the unique opportunity to learn about the re-crafted Kenyan constitution and the individual paths to leadership of three of its elected women leaders: The Hon. Maison Leshoomo, The Hon. Janet Wangabo Wanyama, and Hon. Judith Nayiai Pareno. Also present was the Hon. David Ochieng, a long-time women’s champion, who spoke about the ongoing effort to fully implement constitutional reforms for gender equality enacted in 2010.

According to Womankind.org.uk, “Kenya’s women’s movement has a vast, rich history. Women have been instrumental in various resistance movements throughout the country’s history, including in the fight for Kenya’s independence. The movement continues to grow, with young women eager to join and expand on issues tackled by the movement.”

In 2010, Kenya passed a new constitution that explicitly recognized gender equality—the first in its history to do so. The new constitution put quotas in place to increase the number of women and people with disabilities represented in government, in effort to achieve greater equity. Yet today, these revisions have not yet been fully implemented, and women are yet to be fully able to make key decisions that impact their lives and communities.

Ensuring and protecting the rights of women is a global effort. The Washington State Women’s Commission is proud to have established a partnership with Kenyan parliamentary leadership as both organizations work concurrently to realize gender equality and gender justice in our respective societies.

Securing rights for women gives opportunities not only to individual women and girls—it improves the ways in which countries and communities work. With women equitably represented in leadership, decisions made are more likely to be inclusive and meaningfully address issues that women face. When women are empowered to lead at all levels of decision-making, it advances economic, social, and political progress for all. 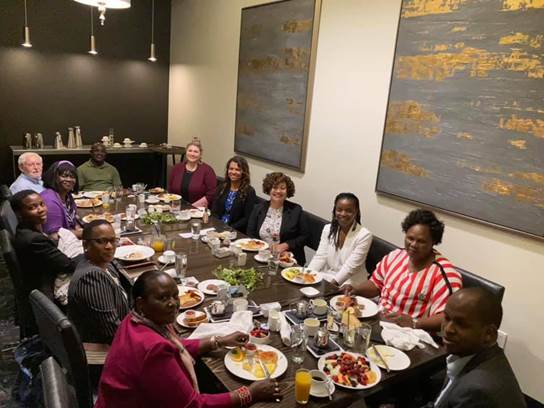 Clockwise, starting at the top middle of the table:

The Whitworth organizers of the delegation were Dr. Yoder & Dr. Wilburn, as well as Megan Hershey, Associate Professor of Political Science at Whitworth University. Read more about the visit below:

Learn more about the work of the Kenyan delegation at their websites:

Read more about the Kenyan women’s movement, and efforts towards gender equality and justice in Kenya:

Learn more about women-led organizations in Kenya that are working towards gender equality and gender justice: